I was playing a choral rehearsal the other day and the conductor made a joke comparing choirs and orchestras that has left me wondering ever since:

Why such a drastic difference between pre-concert performance etiquette of an orchestra and that of a choral ensemble?

We’ve seen it every time – an orchestra’s members casually enter the stage at their own leisure, walking between chairs to their respective section, to their own stand, and freely warm up their instruments and practice excerpts prior to tuning and the concert master and maestra entering the stage. 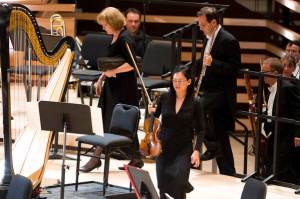 What if choirs did this?

Imagine each member of the choir making their way to their place on the risers as individuals, each to his or own music stand, immediately commencing with lip trills, body kinesthetics, sighs, excerpts from an aria, clearing phlegm, and other things that singers do before they ever reach the stage. Finally, the tenor section leader draws his trusty tuning fork and the entire choir agrees upon pitch and tunes a chord before the maestra enters the stage…

I was in Salt Lake City for the 2015 ACDA National Convention and I had the privilege of hearing the Estonian Philharmonic Chamber Choir perform. It was a euphoric performance full of deep artistry and masterful professionalism. Among other pieces they performed Pärt’s “Adam’s Lament,” a wickedly challenging dose of repertoire. Every vocalist had his or her own stand, and even more striking, actually had their own tuning fork to assist in finding their pitches. Of all choirs I have ever seen perform, they could have certainly made their entrance to the stage similar to the aforementioned description. But alas, they did as all choirs do – processed onto the stage in single-file fashion. They have the street cred and talent to perform such an entry, but they didn’t…

…Why not? What’s the big deal and does it really matter?

I suppose one could argue that carrying instruments is more cumbersome. Vocalists naturally carry their instruments with them wherever they go. Choirs are intended to represent a blend of voices and colors…but isn’t that the same intent of a string section? I have also heard a myriad of other pejorative comments toward either singers AND instrumentalists that could sway the reasoning behind the enormous differences between pre-concert rituals. However, none seem to hold any validity or HISTORY behind why this dichotomy exists between practices.

Frankly, per the choral rationale, the adages expressing first impressions and the audience “hearing first with their eyes” are rather tiresome in today’s age of stimulating concerts. What if we want to see and hear and witness each singer as an individual, a professional, an artistic technician? I saw that in Salt Lake, but would have loved to see and hear those Estonian first sopranos vocalize just as much as I enjoy seeing The Philadelphia Orchestra’s tubist play her long tones to warm up her embouchure (she’s a rockstar).

I say what seems bizarre or uncouth in choral performance practice today may be tomorrow’s innovative move toward genius.

Maybe, just maybe, you may see a choir in Denver make their way to the stage in ways you wouldn’t expect…

6 thoughts on “Observations on Performance Etiquette”